When it comes to film, I have specific preference for video settings for the Sony a7iii that we use. My video settings are not only for the mirrorless Sony cameras, but for any camera that can support manual video settings. So in this article, I’ll do my best to talk to the general settings so your video production process is somewhat standardized for every shoot.

Types of Shots For Google My Business Video Production

To begin, we need to understand the type of shots we may be taking for our video we produce for paying clients. We have A roll and B roll.

B roll is the supplemental footage, usually the footage that adds imagery to the context of what the A roll is talking about.

In the context of a marketing video or a Google My Business video for a client, the talking head is A roll and the B roll is supplemental footage of their business products or service that you’ll then add to the edit of the video as the client talk about those things.

What that means is as the client talks about certain things or as a business is talking about their services like a real estate agent talking about some features of the home, the B roll is then the footage of the features or the services or the actions that the A role that the talking head is talking about—and that just adds a different dynamic of video production for video.

So rather than just seeing a talking head, and then having them describe actions, describe services, describe bedrooms, or describe everything, and then you as the viewer try to use your imagination, trying to figure out what they’re talking about, the B roll helps supplement whatever they’re saying, to add imagery around what they’re saying. This is going to be directed towards Google My Business, but the principles are applied to anything that you do behind the camera.

There are basically three settings on a DSLR camera that controls the amount of light that hits the sensor—shutter speed, f-stop, and ISO.

First, set your camera to its video mode if it has one. 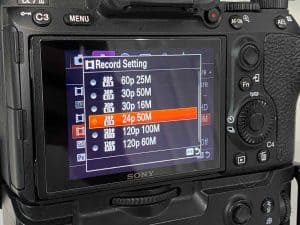 If your camera doesn’t have the option to choose the megabits or quality of video, the most important setting you’ll need to adjust is the framerate. 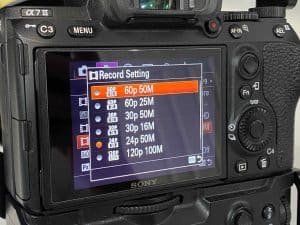 It’s best to get your roll A done first, get all of your talking heads done first. That way when you go and do your B roll,  if you do B roll—like I said, Google My Business is a very short video—so more than likely you may not have to get B roll but in the event that you do, just to add a little bit more dynamic and imagery to whatever the A roll is saying. You want to get all your A roll done and out of the way and then do your B roll so that way you’re only changing the camera setting once.

If you’re doing B roll, you’re going to go all the way to the top and your settings, and it’s going to be 60p 50m, this is 60 frames per  second at 50 megabits for the quality for the bit rate. 50 is not necessarily the best, but it’s high up there meaning that we’re going to capture a lot of good information that we can then manipulate the color and the lighting and everything with it.

Now, if you look below, you see 1/50 that’s your shutter speed, and then you have F 6.3 and then you have the ISO at 640, your ISO should never go past 800. On Sony cameras, we can afford to go a little bit higher, but rule thumb is ISO 800 is going to be your max on the video. Keep your max ISO at 800 and your shutter speed, we all know what the shutter speed is, it’s 1/50 it’s double the frame rate. In this case, we’re at 24 frames per second 50 is a closest doubling point for the frame rate that we have. 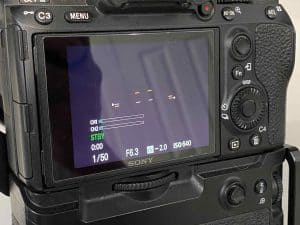 Motion blur makes the video look more natural, not cinematic—people say it cinematic, I don’t go for the cinematic views—it makes it look more natural. If you see jittery movements, then it just looks kind of off and it’s distracting—he motion blur keeps the video less distracting, more realistic, and just more appealing to watch. If we were to go up higher than 1/50 of a second if we were to use a faster shutter speed, I would probably say no more than 1/80 of a second for the shutter speed for the 24 frames per second.

F-stop, aka aperture, is the focal length and field of view of the lens. It also controls the amount of light that will hit the sensor. The lower the number, the more light will hit the sensor, but it also controls how sharp your image is. Having your image too sharp—at a low f-stop—means that smaller movements from your subject will invite blurry shots. You don’t want to have your subject to hold very still as they talk in front of the camera, so you’ll have to increase that f-stop to give your subject room to move, as well as to get enough light in the sensor, and still be in focus.

Typically I’ll have my f-stop between 4.0 and 9.0 depending on lighting conditions—4.0 for low-light conditions and 9.0 if there’s plenty of light. Be sure to keep your focus settings to continuous auto-focus so the camera can do the heavy lifting for you. The last thing you want to manage is manual focus as your subject is moving or adjusting your focus with every shot for B-roll.

If you’re shooting a lot of business videos or real estate videos that require people to talk in front of the camera, ideally 24 frames per second is your best choice. Be sure to keep your shutter speed at no less than double your frame rate and your F-stop you can go down lower, just know that the sharper or lower your f-stop is, the more room for error you’ll have whenever somebody is moving in front of the camera. Autofocus on continuous will get help you not have to focus manually so much it’s going to allow the camera to do a lot of that heavy lifting.